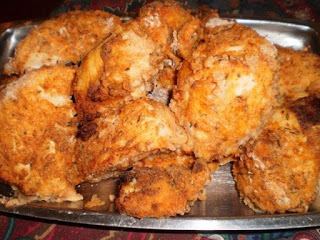 The first two times I followed this recipe, the chicken tasted a little too greasy for us. I decided to give it one last try
and substituted 1/2 cup butter for the oil. I also add a little milk to the beaten egg. It turned out delicious this time.
We’ll definitely make it again!
My family loves this recipe. I make it with chicken drumsticks instead of thighs and the only change I make is
spraying the pan with Pam instead of oil. We’ve tried this recipe several times and they are ALWAYS cooked in the
allowted time and are ALWAYS moist and yummy. We even fight over the leftovers.
Easy, no-fuss fried chicken. The first batch I made was delicious and the family raved about it. I used baggies for the
breading for easy cleanup. I also let the breading “rest” for fifteen minutes before putting the chicken in the oven, so
the coating stayed on well and turned out nice and crisp. Will definitely make this again!
This recipe was really easy, and very good considering it was baked. I had too much chicken to put in one pan so I
decided to do a little test and pan fry the rest of it the traditional way. The oven fried was better overall; it required
less “work” because you only had to flip it once and didn’t have to “watch” it and oil didn’t pop out and burn me (as
usual). I think the key to keeping the coating on is making sure you pat dry the chicken first, coat well with the flour,
shaking off the excess, quickly drudging it though the egg, which I added about 4 tablespoons of standard hot sauce
to my egg mixture just to give it a little kick, and then really roll it around in the bread crumbs to get a nice even coat.
I added lemmon pepper seasoning after the chicken was in the pan right before it went into the oven and it really
was delish. Will do this again for sure!
A nice recipe for “Fried” Chicken, it was crisp, delecious, great flavor, and the only thing I changed was using Pam
instead of the half cup of olive oil. You don’t need a lot of it, just a light spray. Will definitely be making this again.
I find this easy – use a large freezer bag for the flour (and salt and pepper), shake and remove the floured chicken
and re-use same bag for the bread crumb coating (why use two bags?). I also left the coated chicken in the fridge
for a while before placing into the glass roasting pan with the oil already heated. The finished coating is similar in
texture to original recipe KFC, which is to my liking (chewy-crispy) but can easily be made more crispy by cranking
the heat up for the last 5 min or so.
My grandma used to make us boneless chicken breast “patties” to take on vacation– we ate then cold out of the
cooler or hot when we got there. It would take her all day to pound, bread and fry this juicy familiar family favorite. I
have not had chicken like that since she passed away… that is, until now! This chicken tasted very very similar to
hers, with half the work. I used boneless, skinnless chicken thighs (b/c that is what I had), and only about 1/2 cup oil.
My only advice is that you don’t overcrowd the pan- maybe that is why some people’s took forever. The chicken has
to have space between the pieces for oil and air to move or they will turn soggy. I had my pan too full and realized it
in time to separate into two before any problems arose. Overall, great, easy, tasty and not greasy, if you go easy on
the oil and blot on towels afterward. Loved it!!! Thanks. Grandma lives on!

Directions:
Put the chicken into a bowl of milk to soak for about 25 minutes. Put the salt, Season All, pepper, flour, and paprika
into a zipper bag or large bowl.
Preheat the oven to 400 degrees.
Melt the butter and pour into a 9 x 13 baking dish. Make sure the bottom of the entiure dish is coated with the melted
butter.
Remove the chicken from the milk and shake off any excess milk, then dip (or shake) each chicken piece in the
seasoning mix that’s in the zipper bag or bowl. Be sure each chicken breast is well coated with the seasoning, then
place it in the baking dish.
Source: Allrecipes.com

To See All Ingredients and Directions Please Head Over Next Page