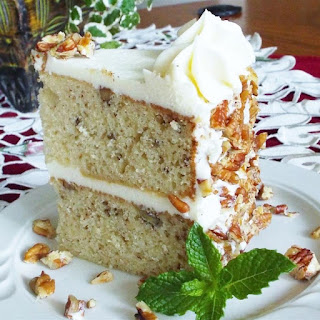 Hi there, I made this tonight. It was really good and much admired by the crowd. I made the following changes: I added 1/4 cup oil to the batter based on the “thick” comments I read on other reviews. On the icing, I forgot that others said that it wouldn’t cover the whole cake easily, so I doubled the icing recipe, except I only had 8 oz of cream cheese so I got it the right consistency by adding cream till it worked well instead of an extra thing of cream cheese. The only thing I would do differently next time is possibly 1.5 the recipe so that the 3 cake pans were fully loaded. When completed, I cut it like the restaurants do, so the pieces in the middle were all yummy and perfect, but the perimeter pieces were a little dried out as they were too thin and got a little more done. It really was quite good. I found this review in the saved file, I just made it again on 8/26/08, again it was very good. I would say though, about the negative ratings, as a cook it always bothers me when people take a recipe, remove ingredients and then give things a bad rating. I know people who don’t share their recipes for just this reason. If you *do* get their recipes, they have one motto: Make it exactly how it says in the instructions the first time, then after that do anything you want. It’s a soapbox, but it’s only fair.

How to make it :
Beat first 4 ingredients at medium speed with an electric mixer 2 minutes. Stir in coconut and pecans. Pour into 3 greased and floured 9-inch round cake pans.
Bake at 350° for 15 to 17 minutes or until a wooden pick inserted in center comes out clean. Cool in pans on wire racks 10 minutes. Remove from pans, and cool completely on wire racks.
Sprinkle each cake layer evenly with rum, if desired; let stand 10 minutes.
Spread Cream Cheese Frosting between layers and on top and sides of the cake. Chill 2 hours before slicing.

How to make it :
Beat cream cheese and butter at medium speed with an electric mixer until smooth. Gradually add powdered sugar, beating until light and fluffy. Stir in vanilla and pecans. Frost cake when completely cooled.
To See All Ingredients and Directions Please Head Over Next Page