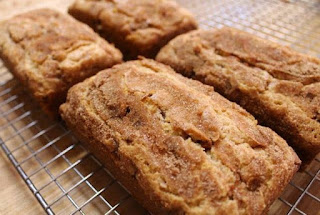 How to MAKE:
In a large bowl, mix together the butter, sugar, salt and cinnamon until creamy and fluffy. Mix in the eggs until well combined then stir in the vanilla and sour cream.

In a separate bowl, mix together the flour and baking powder then add to the cream mixture and mix until well combined. Stir in the cinnamon chips.

In a bowl, mix together 3 tbsps of sugar and 3 tsps of cinnamon and sprinkle over the loafs.
In a preheated oven to 350° bake for 35 to 38 minutes.
To See All Ingredients and Directions Please Head Over Next Page